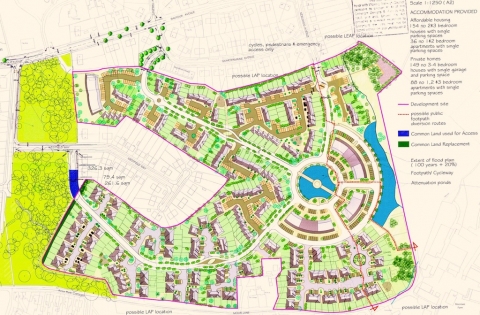 Well the forces of propaganda are out in force again.

Witness something called an illustrative site layout included in the package of documents delivered to support access application (2009/0764).

At first glance this is nothing less than a revolutionary compared to the previous site maps we have been shown, in particular:

However before you all get too excited read the small print on the diagram that states that:

For illustration purposes.  Not forming part of application.

In other words a load of old toot that is produced by a developer to make the proposed development look good and to let the decision makers at the planning committee feel a warm glow.

Posted On 9 September 2009
Message from WBC: The Public Workshop will be open from 11am - 4pm on Saturday 19th September at the Moorcroft Centre for the Community. http://www.woking.gov.uk/community/older/centresforthecommunity/moorcroft…

And they said this would never happen….!

Posted On 8 June 2009
Here at WCRA we are still formulating the official letter that we are going to submit. For those of you who need a reminder of…